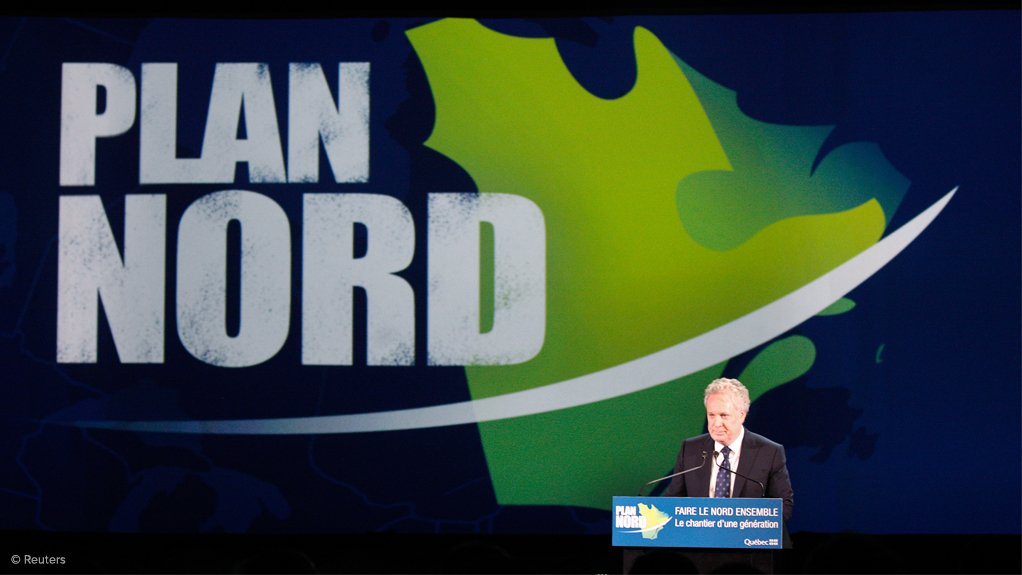 Toronto – Mining Weekly – When the Quebec government’s Plan Nord to develop the parts of the province located north of the 49th parallel was launched under Jean Charest’s Quebec Liberal Party in May 2011, it was heralded as a timely and necessary act in the mining industry’s favourable economic context at the time.

But a succession of political parties forming provincial governments and trying to sway the plan according to their ideologies, coupled with the sustained global collapse of key commodity prices had almost derailed the plan.

At the time, the government announced that Plan Nord would touch on energy development, mining, infrastructure, tourism and conservation in a sweeping set of projects that would receive $80-billion in public and private investment over the next 25 years, Quebec-based Fasken Martineau partner Jean Gagné told delegates attending the Prospectors & Developers Association of Canada’s (PDAC’s) yearly convention on Monday.

Plan Nord was also intended to generate $14-billion for provincial coffers and create an expected 20 000 jobs. Eleven new mining projects were foreseen during the next few years, which would generate $8.2-billion in investments and create 11 000 jobs during the construction phase alone.

At the time, many projects were already under development in Quebec including Goldcorp’s $2.1-billion Éléonore gold project, which was now close to completion, and Stornoway’s diamond project in the Otish Mountains, which was currently under construction.

However, Gagné noted that despite these prominent mines advancing, Plan Nord was struggling to find its place and structure.

To complicate things, in September 2013, a minority Parti Quebecois-led government was elected and it reengineered the Plan Nord. During this period, Parti Quebecois also attempted to amend the Mining Act and Mining Duties Act, which had been partially accomplished under the Liberal government.

REVAMPED PLAN
Gagné explained that after the Liberal Party was re-elected in the spring of 2014, under the leadership of Philippe Couillard, the province had put renewed efforts into Plan Nord to revive the economic development strategy.

“The government has given important indications that it would grant funds to allow for projects to reach the advanced development stage. The government also set up the Société du Plan Nord to facilitate the coordination of all initiatives and interactions between [itself] and mining promoters. This is an important step,” he said.

However, the government had to deal with various challenges, including smaller development projects, which had difficulties in completing financing owing to persistent low commodity prices, access to and financing of adequate transportation infrastructures, the abandonment of certain major projects and social acceptability issues.

“Despite these challenges, Plan Nord has attracted interest from the international investment scene and should be a source of pride for all Quebecers; it constitutes a concerted effort on the part of the government, in collaboration with all stakeholders, to develop the natural resources industry in Quebec for the benefit of all Quebecers,” Gagné advised.

FIRST MOVER
One of the most significant projects located in this vast and emergent region of the province was Goldcorp’s Éléonore, which was the first major mine development undertaken in tandem with the provincial government’s Plan Nord initiative.

Executive VP for corporate affairs and sustainability Brent Bergeron told the PDAC audience that the project, located in the James Bay region of Northern Quebec, was one of the 11 mining projects identified inside the 1.2-million square kilometre area covered by Plan Nord, noting that after a four-year development phase, Éléonore achieved first gold production in October last year.

Within the geographical area of Plan Nord, Goldcorp had invested about $1.8-billion in the development of the mine and part of the infrastructure around the project, including the construction of a 70 km all-weather road that connected the mine site to a road belonging to government-owned public utility Hydro Quebec, which terminated at a dam on the Opinaca reservoir. In cooperation with Hydro Quebec, Goldcorp had also erected a 120 kV power line next to the road.

Goldcorp had also forged a strong partnership with the Cree Nation of Wemindji, the grand council of the Crees of Eeyou Istchee, the Cree national government, as well as with suppliers and contractors from this region of Quebec.

“We are proud of being the first mining company in Quebec’s Plan Nord and plan to continue with our vision of ‘Together, Creating Sustainable Value’ in the region in the years to come,” Bergeron stated.

During the project‘s development stage, 2 000 jobs were created in Quebec and about 900 of these were expected to be maintained as the company moved towards full production.

This is very good news for the mining industry in Canada and in particular for Quebec. It is always encouraging when a government is interested in supporting and getting involved in large projects such as the Quebec’s Plan Nord.

SNF  Canada has been active in this area, we were fortunate to obtain the supply of equipment and polymer for the Eleonore project, we are excited about the future development in this area.