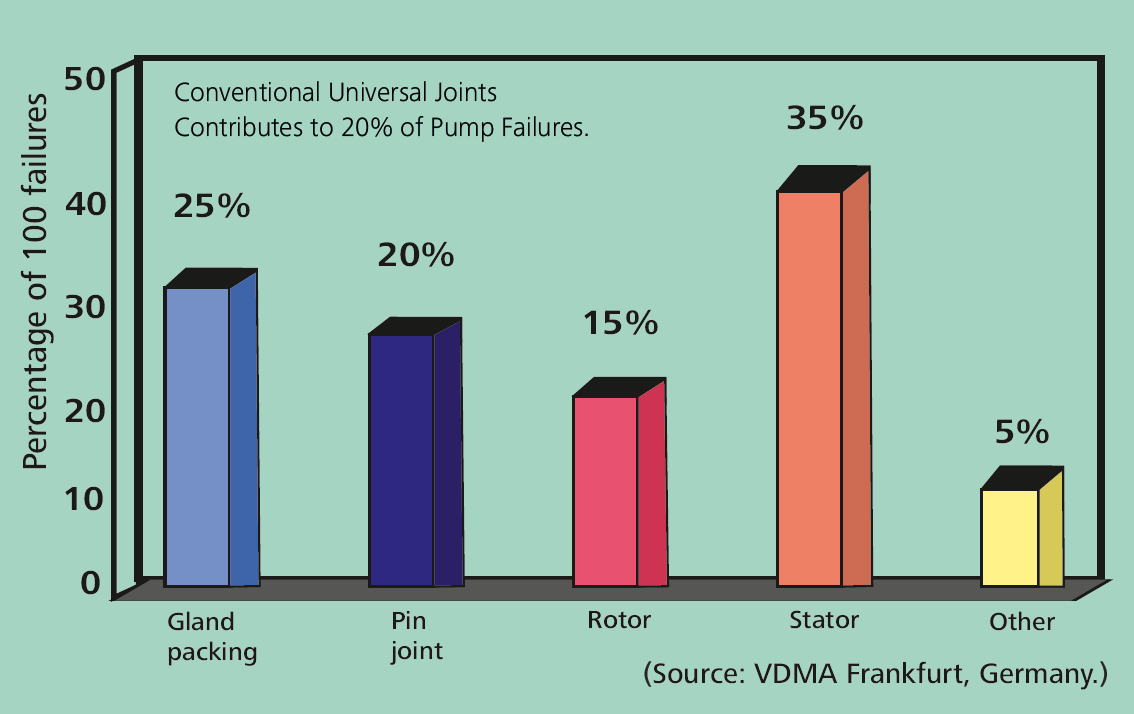 Due to the ever increasing demands of users on the economic efficiency, there is a continuous pressure on the pump manufacturers to challenge the design of progressive cavity pumps. In this edition of Roto Tech, different design variants for universal joints are presented and discussed with regard to their advantages and disadvantages. By the systematic implementation of innovative design concepts in universal joint, it has been possible to realize a leap in technology & create a new generation of progressive cavity pump on a considerably higher technological level.

Progressive cavity pumps are a type of positive displacement pump. Like all type of positive displacement pumps, progressive cavity pump capture liquid in a defined cavity. This cavity is created between a rotating member, usually constructed of steel machined into a single helix, and a stationary member, normally molded elastomers, with a corresponding double internal helix that has a pitch length twice that of the rotating member. An important consideration of drive train design is the unfortunate characteristics of eccentric
motion by the helical rotor. This is an inherent feature of the progressive cavity design. The eccentricity of its rotation is ac

tually a design consideration affecting the capacity or cavity volume of the pump: hence, larger pumps have rotors with greater eccentricities than smaller
pumps. Of course, the eccentric motion of the rotor cannot be conveyed into the sealing area of the pumps, where mechanical packing or seals must run on a concentric shaft. To accommodate this transition, a variety of mechanical devices have been employed, the most common of which are the universal joints.

In the widely used pin Joint, the pin transmits forces and moments; i.e. there is no functional separation between axial force and torque transmission. The forces are transferred in undefined line contact under relative motion. Only a short lever arm is available for force transmission, so that sliding contact is established with relatively high surface pressure
on the pin. The kinematics of this design principle result in relatively high wear on the pin joints.
Systematic analyses of pin joint failures have shown that wear starts in the contact lines of the torque transmission. The axial force acts on the pin, causing angular displacement relative to the bore of the connecting rod, which in turn results in wear spirals around the pin circumference. Another design variant which is the flexible bar joint. Its kinematics, however, cause high transverse forces on the stator via the rotor, and the axes of rotor and stator do not move in parallel. This results in significantly higher wear on the rotor and stator. As the relatively long flexible bars with their relatively small diameter are prone to become wrapped in the long-fibrous material in the pumped medium, which, may in turn, result in malfunction or failure.

A further refinement, capitalizing on the purported advantage of the double pin joint, is the Cardan joint. Everyone should be familiar with this design because of its universal use in the automobile industry.

Accepted and refined over the last 100 years, this joint can absorb massive amounts of thrust load and torque. Dynamic loading is distributed over large surface areas covered with
needle bearings. Even when used in applications requiring several hundred horse power, it has proven extremely reliable and durable.

But when applied to a pump, it too has some limitations. The bearings are normally only
protected against intrusion from the pumpage of lip seals. Just as these seals are unacceptable for pin joint pumps, so are they unacceptable for Cardan joint pumps. While produced in large numbers and relatively inexpensive, Cardan joints are normally not practically used in applications for less than 75 hp , the power requirement for a fairly small automobile but a fairly large progressive cavity pump. For medium to small pumps, the Cardan joint is too large and will restrict the pumping element inlet.

An interesting characteristic of the Cardan joint is that it must operate with a great deal of angularity. It must “flex”. The motion is required to have needle bearings rotate so they will wear evenly.It becomes a latent advantage and helps to reduce the length of the progressive cavity pumps. In a Curved tooth joint, torque is transmitted by the gear tooth system. On this design, too however, there is an undefined contact point at relatively high surface pressure at the tooth flanks. Curved tooth joints require joint heads with a large diameter, as the torque transmission toothed rings extend all the way to the outer diameter of the joint head, and space is needed for attaching the toothed ring to the shaft and hub. In order to optimize production costs, the toothed rings are often produced with relatively small diameters, which results in high pressure on the tooth flanks and hence, high material loss by abrasion at the tooth flanks. Curved tooth Joints, therefore, also have only relatively short service lives.

The sliding block joint is a completely new joint technology. Unlike conventional design variants, axial and radial forces are completely separated in a sliding block joint. This patented design principle makes for a clear kinematic situation and allows longer lever arms for torque transmission, so that relatively high torques can be transmitted with smaller joint diameters, compared with conventional solutions. The relatively large contact surfaces for torque and axial force transmission which can be realized, thanks to this design principle result in minor surface pressures and therefore reduced wear.

Roto has standardized on the Cardan Type of Universal joints in their Progressive Cavity Range of pumps.